There seems to be a lot of these lights on eBay and other places. Ford switched to a different light with a different connector and many dealerships seem to be dumping brand new obsolete inventory. I bought mine many months ago and left them sitting in a box in my office until the weather got nicer. The lights on my trailer quit working and I had always hated those 2-wire lights hung low to the ground so the license plate got all messed up.

I wasn’t around when the lights got messed up. It started off with my brother telling me over the phone that the connector had pulled apart and he couldn’t figure out the wiring. I had gotten home and took some time downloading “standard” wiring patterns. I even bought a new connector. One day when the weather wasn’t too horrible I tried everything. Went through every pattern. Couldn’t make it work. At that point I decided the nearly two decade old battery in the break-away-brake system was causing everything to ground out. I never liked that thing. I understand. It’s a safety thing. If I was driving on the Interstate or highway speed, I would definitely have wanted it. Probably why I bought a trailer with it. Fact of life is that trailer hasn’t left a four square mile radius around the farm in a decade or more. We primarily use it to haul a pair of zero turn mowers between farms so we can mow. We used to also put pallets of seed on it to take to the field, but we don’t even do that anymore.

I bought a brand new plug-and-junction-box harness on eBay. When I thought it was going to be a nice day I loaded up some tools and went over to my brother’s place to work on the trailer. After getting rained on twice before 2pm I pulled the trailer home and backed it in my shed. Yes, Captain Obvious, I should have done that to begin with!

While we are speaking Captain Obvious, why couldn’t you have stopped by months earlier and suggested to either myself or my brother to check the bulbs first. Those chincy 2-wire lights had the old style 2-pole twist in bulbs. I think they were obsolete even when I bought the trailer. Every bulb was bad! Thankfully the local auto parts store was open during COVID-19 lock down and had some really old bulb inventory. 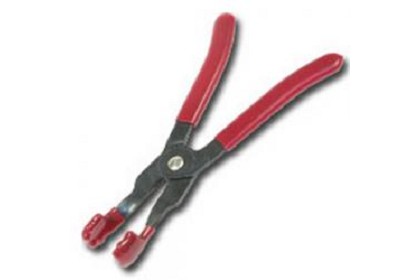 When dealing with old twist in bulbs, spark plug wire pliers are your best friend. They can gently curve around the bulb to get to the brass base so you can then have the bulb self destructs without gashing your hand open. After cleaning inside of the lights and replacing all of the bulbs I had some of my lights back. I had tail lights. No turn signal and no brake lights.

At this point I decided to bite the bullet. I had wanted to put the new lights on. Mainly I wanted to get the license plate up off the ground so it wasn’t getting murdalated. You couldn’t even read the thing from behind the trailer it was so low and hidden. So, a few days later, the weather was nice and we weren’t in the field. My nephew was bored and offered to help. He needed to learn how to “finish a hole” when drilling through metal anyway. Yes, there is now one fewer bit in that massive bit assortment. You can’t really learn how to “finish a hole” until you’ve broken a few bits doing it the wrong way. It’s not the only bit that hundred plus titanium bit set is missing. Sometimes you forget how to finish a hole when you are in a hurry. <Grin>

I had done quite a bit of search prior to this day and could not find just a short pigtail with the proper connector for these lights. Why the Department of Transportation can’t mandate an industry standard 4-pin tail light connector I will never understand. It may be difficult to see in the image, but the pins are “numbered”

The way this stuff is molded together you can’t really bypass anything either. I ended up buying the Grote 01-6868-82 pigtails, paying more for them than I did the lights. They are also massively long. I think they are four feet or something like that. They have another male custom Ford connector on the other end.  Mine came with actual plastic wire loom around them though most pictures just show the wires.

You have read this far because you are in the leaky boat I was once in. You’ve already been to the Grote Web site and found no information on these lights and basically only a part number with a short description for the pigtail. Most likely you are reading this on a Sunday when there is no customer service or technical support to “chat” with as well. Fear not, I won’t cheat you. I just have a little bit more to tell you.

People always ask why I keep this Radio Shack 12v power supply around. They see it buried on a shelf in my office and can’t figure out why a software geek would have it. Well, because of sh*t like this. When you have a mystery pin-out you can avoid a lot of work and hopefully frying things using a low amperage stand alone power supply. It’s certainly way nicer than crawling under a trailer, wiring up four connections, then finding out you are wrong. It certainly helped me test out some “lore” found in one comment section on one user group for a site I had never heard of. Yeah, I was feeling really confident about that!

It may not be completely obvious from the pictures, but the red and black nuts on the front have hollow centers exposing metal. This is so you can “test by touching” when you aren’t sure.

Ford couldn’t possibly be so kind as to use some form of “standard” pin-out. They couldn’t even be bothered to use industry standard wire color. This was designed to really screw you if you didn’t let a Ford dealer do it.

Using red for ground! Just how “standard” is that. On a trailer, white is ground.

A Bit More About Cutting the Cord